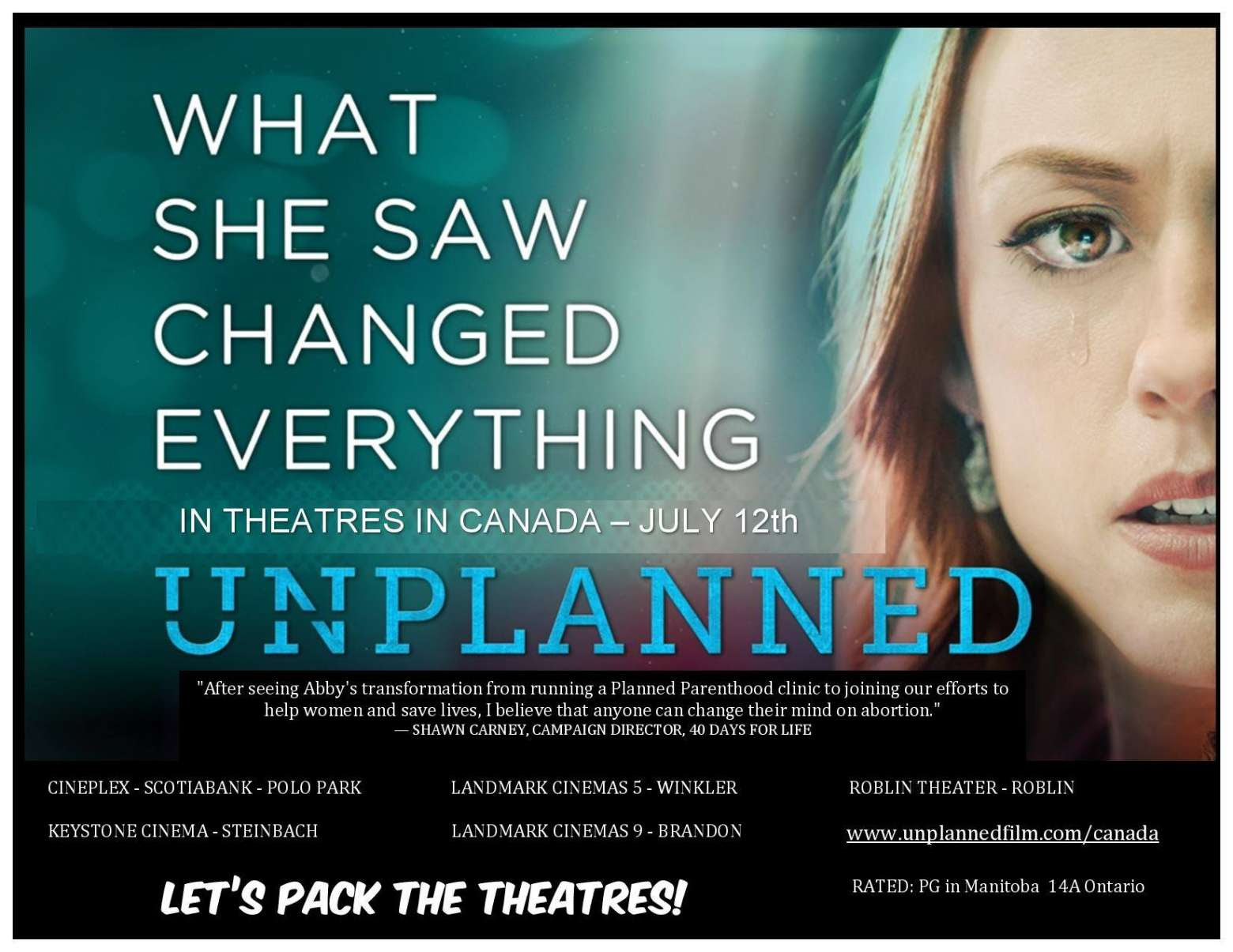 On July 12, “Unplanned” is going to be released in theatres across Canada. It is a must-see film so invite your family, friends, churches and community, both pro-life and not, to see it with you. Cinemas in Manitoba that are going to be showing this film include Cineplex Scotiabank (Polo Park, Winnipeg), Keystone Cinema (Steinbach), Landmark Cinemas 5 (Winkler), Landmark Cinemas 9 (Brandon), and Roblin Theater (Roblin). Check the website https://www.unplannedfilm.com/canada for more theatres as they appear with their showtimes. If a theatre does not seem to be showing the film, feel free to contact the theatres and request “Unplanned” to be shown. You can also do this with your local theatres.

“Unplanned” has changed the hearts of so many people who have seen it – even if hearts are not changed, at least there is a better awareness of what the abortion process is like and an understanding of what is legalized in Canada. The more people who see this film, the more likely there is to be a change in mindset. Plan a group event or buyout the theatre with your church and businesses.

For parishes and groups wanting to book a theatre buyout, information on how to proceed is available at www.unplannedfilm.com/canada or contact Life’s Vision at lifesvision@shaw.ca and they will direct you in the next steps.

But despite their differences of nature and moral gravity, contraception and abortion are often closely connected, as fruits of the same tree.

“All Abby Johnson ever wanted to do was help women. As one of the youngest Planned Parenthood clinic directors in the nation, she was involved in upwards of 22,000 abortions and counselled countless women about their reproductive choices. Her passion surrounding a woman’s right to choose even led her to become a spokesperson for planned parenthood, fighting to enact legislation for the cause she so deeply believed in.
Until the day she saw something that changed everything, leading Abby Johnson to join her former enemies at 40 Days For Life, & become one of the most ardent pro-life speakers ever.” Rated PG in Manitoba.