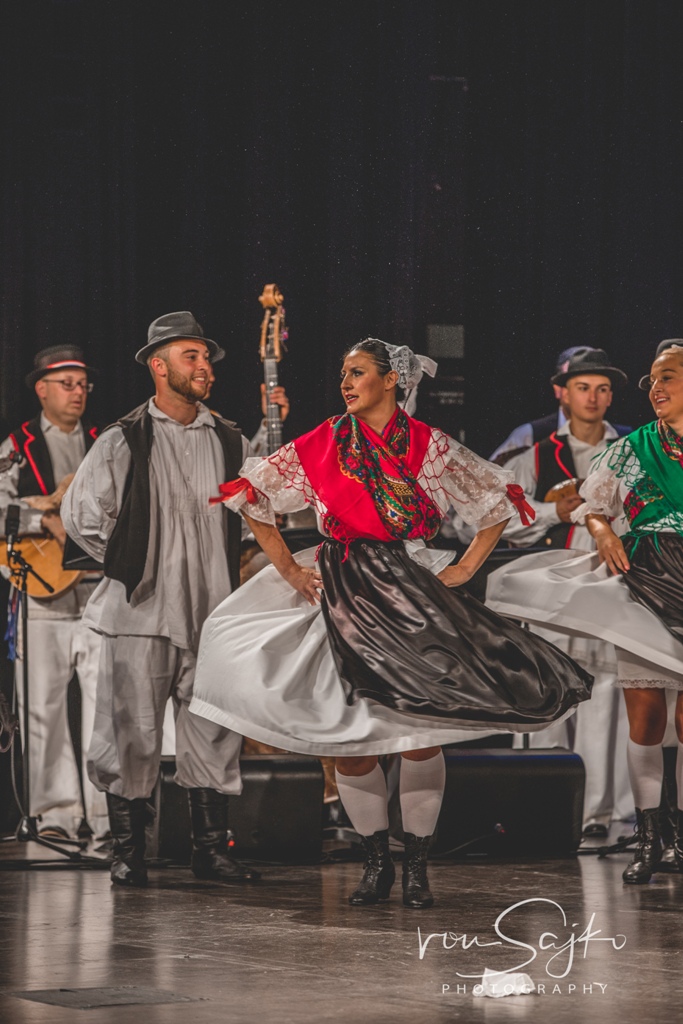 On Pentecost Sunday, May 20th 2018, the participants of the 41st Western Canadian Croatian Folklore Festival along with the parishioners of St. Nicholas Tavelich, gathered together to celebrate Holy Mass. The Mass was led by Father Marko Štefanec and accompanied by Father Jeffrey Burwell, a Jesuit priest from Regina and friend to our small congregation. During the opening procession representatives from each folklore group coming from Victoria, Vancouver, Edmonton, Calgary and Winnipeg carried banners displaying their ensemble’s name.

Father Marko began the Mass by reminding us we have gathered here because of something familiar and understandable, we have a common interest which is that we recognize each other in our rich Croatian cultural inheritance, we recognize each other in the music, dances and songs. In that same way we also share in our faith of the risen Jesus Christ who has brought us here together again.

In the homily Father Marko paraphrased the words of the Old Testament leader Joshua who testified that his people forgot the great deeds that God had done for them and he gave them a choice to either serve the pagan gods or to serve Yaweh. The people answered together, far be it from us to forsake the Lord to serve other gods. We know from history that time went by and the future generation forgot what they had promised, who would have expected that? Father Marko mentioned that he is not telling us this because we had forgotten the Lord but so that we can learn from their mistakes and the same does not happen to us. This means that in life we must always make decisions and choose rightly. God willing we always stand firm with the Lord. At the end our pastor invited the youth to know Christ better. Knowing Him is the same as loving Him, loving Him means to trust Him and if we trust Him it will bring us a life that we never imagined!

The following day the folklore concert took place at Club Regent Event Centre where around 700 spectators enjoyed multiple performances highlighting the beautiful, rich and lively Croatian culture through traditional dance, song and music from across our beautiful homeland of Croatia. A memorable moment from the concert was when the Tamburica band from Winnipeg was joined by some of the past members of Winnipeg’s Hrvatsko srce tamburica band. This special and moving moment brought together friends from across Canada and connected young and old while leaving no dry eye in the audience. A lively guest performance by the Ukrainian group Rusalka was another treat for the audience. The concert was closed by a performance from the region of Međimurije by Vancouver group TOKS who will be the hosts for the 42nd folklore festival which will be held in 2019 in Vancouver on May long weekend.

Subsequent to the concert was the informal banquet where guests were entertained by “Modro Nebo” from Edmonton and where friendships continued to be made. On Sunday evening the formal banquet took place with entertainment provided by “Plavi Dim” from Hamilton. Starting off the formal evening Hrvatska Zora president Matea Batista welcomed all the participants along with Anthony Brnjas, president of the Croatian Canadian Folklore Federation West (CCFFW). Each instructor was also awarded a plaque honouring their commitment and effort towards furthering our culture. That evening was marked by the first ever scholarships awarded from the CCFFW board and committee. The scholarships were awarded to Lucas Sumera from Calgary, Alberta Vila Velebita and Isabella Parrotta from Vancouver, British Columbia Tamburaški orkestar Kardinal Stepinac.

As with all Canadian Croatian Festivals, lifetime friendships were made, and unforgettable moments had. This festival once again shows that through dance, song and tamburica we nourish and nurture our rich heritage from our ancestors. The memories from the 41st Western Canadian Croatian Folklore Festival will forever be in our hearts.