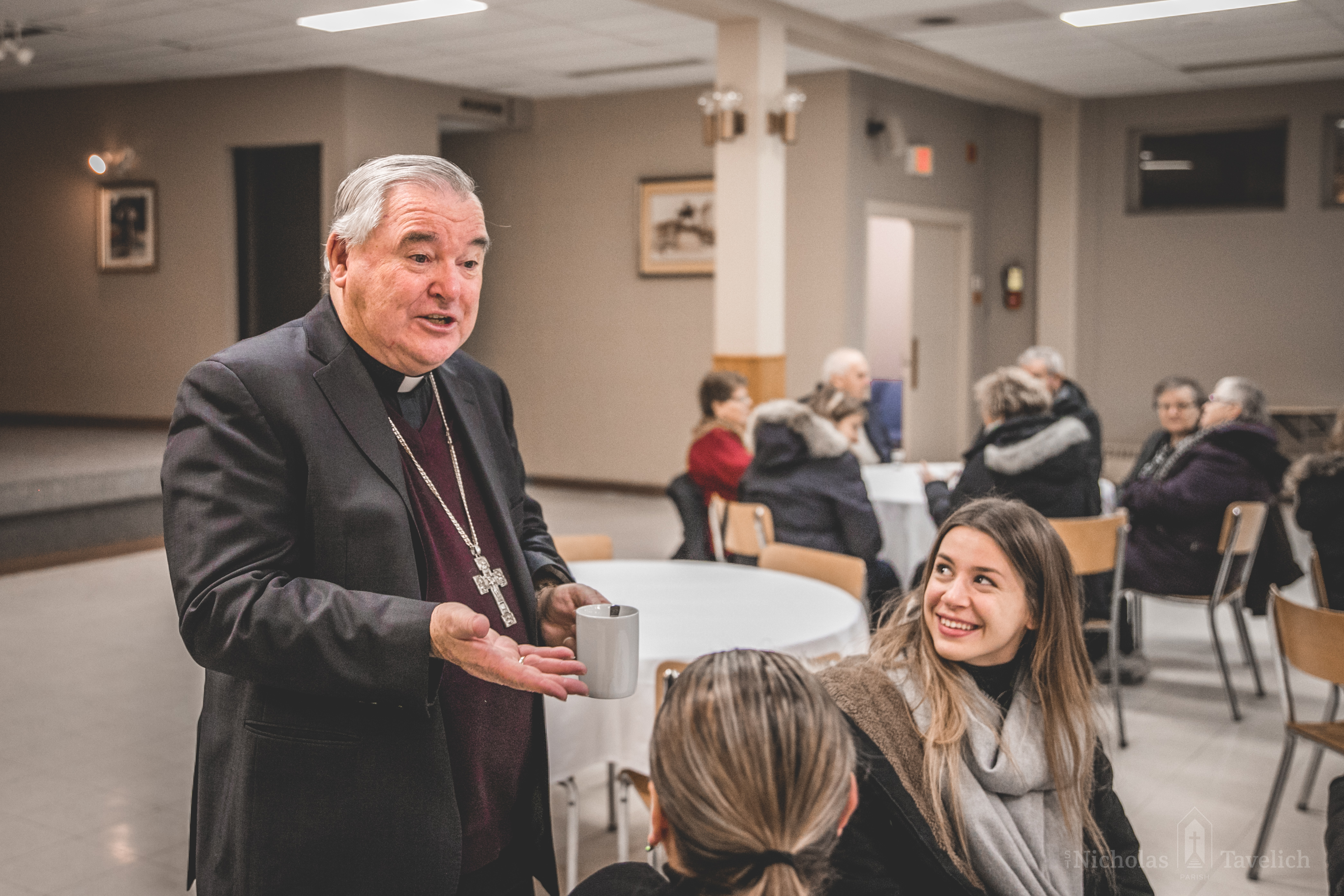 I have the privilege of entering the Holy Season of Advent this year by being in Rome as part of the yearly President’s visit of the CCCB Executive. There are three of us: The CCCB President, Bishop Lionel Gendron, P.S.S., of the Diocese of St. Jean Longueuil; Msgr. Frank Leo, who is General Secretary of the CCCB; and myself as Vice-President.

We arrived Saturday, December 1st, and celebrated the First Sunday of Advent in the private chapel of Marc Cardinal Ouellet, formerly Archbishop of Quebec and now Prefect of the Congregation for Bishops and President of the Pontifical Commission for Latin America. Afterwards we had lunch along with Archbishop Paul-Andre Durocher, Archbishop of Gatineau. It was a welcome gathering of Canadians in a small Roman restaurant on the First Sunday of the new Liturgical Year and a chance to talk about the Church in Canada and abroad.

There is a tradition in Rome that a given country in Europe provides a Christmas Tree to be erected in St. Peter’s Square and then a Christmas Scene be built next to it in front of the obelisk in the middle of the Square. This year something unique has been planned. The manger scene is being constructed entirely out of sand brought to Rome from the famous Dolomite mountains in northeastern Italy. A large canopy is placed over the work area so as to prevent deterioration from the December rains. At present the people in Rome are curious and excited about what this sand-built manger will look like when it is finished very shortly – it is like waiting for a Christmas gift. People, however, are very patient and are willing to wait for the great unveiling!

Are we willing to wait for Christmas to unveil itself? I don’t think we often are, because the four weeks of Advent all too often serve merely to purchase gifts, set up decorations, and prepare in numerous ways for Christmas Day followed a week later by the Civic New Year. All of this could be so much more if we think about it. A story is told of a man who planned to visit a family in a small African village. He did arrive eventually after much delay but was three hours late. He apologized profusely to the family members for his tardiness. But they were completely surprised at his apology because they did not consider him late at all! The man of the household said: “Dear friend, to us you are not late at all. No, we were so excited that you were coming to see us that you were in our hearts ever since we heard that you were coming, and what you have called a delay was simply an opportunity for us to experience even more the joy of your coming! Now that you are here, we will sit down and talk and then food will be brought out to celebrate your presence among us.”

I know a number of families who do not put up their Christmas Tree until Christmas Eve. For four weeks of Advent all that you find in their houses are signs of Advent, the Advent Wreath, maybe a Jesse Tree or a Bible displayed prominently and always open to the Advent Readings throughout those weeks and occasionally Advent music with some family Scripture readings. The theme of waiting for the Christ Child with patience, encouraged by what they hear in Scripture about the end times, the coming of the Messiah and the story of John the Baptist, all help to experience the Great Coming at Bethlehem on the journey to December 25th.

Then, suddenly the Sacred Birth itself is celebrated as a festival of lights, colours, and whatever else one wishes to place within the home. A very different series of weeks now begins in which the Christian experiences the presence of the Christ Child in a special way – a presence that has been enhanced by attentive waiting and holy patience. How beautiful to live the Christmas Season with all of its various feasts as a prolonged festival of the arrival of Christ from Christmas Day all the way to the Feast of the Baptism of the Lord in January! And all of this time, starting with Advent right through the Christmas Season, is an opportunity to be spiritually renewed in a new spiritual year.
What spiritual resolutions are you making?